Why hello, it’s that time of year once again. A time where we say happy thanksgiving to each other and tell each other how thankful we are. … Can we do that on a regular basis and not just on this one day. Are we not thankful every day for what we have, who we love and what blessings we have experienced?

This holiday is so embarrassing.

If this feast was the only thing the American government could come up with to bring some kind of cheerful note to the starting of the nation with the Indian situation, well.. it makes sense. The rest of the history of the Native relations and the American Governments are horrible! Can we say crusaders? Can we say the Inquistion?! Geez – humans

“If Aliens visit us, the outcome would be much as when Columbus landed in America, which didn’t turn out well for the Native Americans…”

Happy Thankstaking! As this is what it really means. 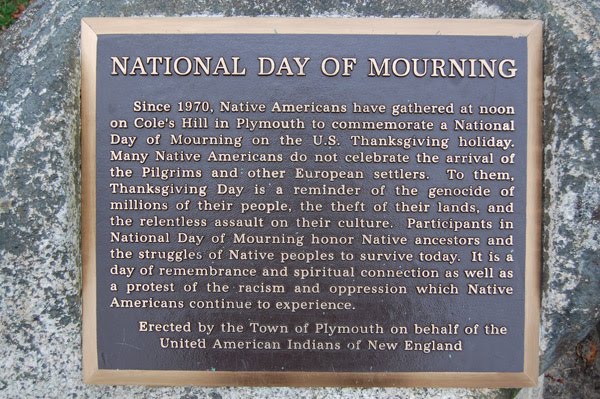 This stone is at Plymouth Rock, as a reminder of the mass atrocities that have fallen on the Native peoples of Turtle Island before this was re-claimed as “The United States of America.”

“Our nation was born in genocide when it embraced the doctrine that the original American, the Indian, was an inferior race. Even before there were large numbers of Negroes on our shore, the scar of racial hatred had already disfigured colonial society. From the sixteenth century forward, blood flowed in battles over racial supremacy. We are perhaps the only nation which tried as a matter of national policy to wipe out its indigenous population. Moreover, we elevated that tragic experience into a noble crusade. Indeed, even today we have not permitted ourselves to reject or feel remorse for this shameful episode. Our literature, our films, our drama, our folklore all exalt it. Our children are still taught to respect the violence which reduced a red-skinned people of an earlier culture into a few fragmented groups herded into impoverished reservations.” – Martin Luther King Jr.

The reason behind “Demystifying Native Americans,” is that as a Native person growing up in this modern world ruled by the European classes. I have always felt that as a society, people just don’t know anything about Native Americans. That it seems to just be grouped into the “Oh, they don’t really exist anymore.” Such as Dragons and Unicorns. They are revered for their mystery and style, but not for what they really are. Everyone wants to be one as a child and or for Halloween. But hey! Being a Native American is not a Costume!!! How would it look if you dressed as any other race? It’s almost as America has a deaf ear when it comes down to Native American education. Learning the reality would make you feel –somewhat less American…where’s that American pride..?

on a lighter note:

And no, Native Americans are not rich because they have casinos! Argh, I can go on and on about that. But that is for another day.

And from the Daily Show earlier this year…

The point is, please people educated yourselves before forming solid opinions. Just like anything, have an open mind and be willing to see all sides of a story before eating the beliefs people feed you. (ie..your elmentary school! )

Here’s a brief and funny take on that by MTV shot this year.

I mean, what would they actually teach you in school?

….”Well you see, life is conquer all and everything possible, then spread your beliefs! This is the story of our great country and it’s forefathers…

“If it be the design of Providence to exterminate these savages in order to make room for cultivators of earth. It seems not possible that rums may be the appointed means.” – Benjamin Franklin

“The immediate objectives are the total destruction and devastation of their settlements and the capture of as many prisoners of every age and sex as possible. It will be essential to ruin their crops in the ground and prevent their planting more.”  –        George Washington

On a closing notation.

Can we all just be kind and listen and hold your opinions and tongues. I hope to one day see an end to the ugly side of humanity. Until then I will be in my artworld.